One problem that pops up in almost any product that has user login is that of avatars. Your design mocks look great with smiling photos of Robert Downey Jr. and Scarlett Johansson, but the reality is that not only will most display photos be of poorer quality, but the majority of your users probably won’t upload one at all.

So we have two problems here, the first is that of placeholder avatars - what does your design look like if no-one has uploaded any display photos? The second is that of encouraging users to upload a display photo, which I’ll cover in my next post.

Facebook solves this problem by using a generic silhouette as a placeholder avatar, displaying either a male or female version depending on how you’ve set your gender.

I don’t think this is a great solution for a number of reasons.

However, Facebook gets away with it because everyone uploads a display photo, so this placeholder rarely shows.

This approach is used by Twitter, Slack, Tumblr and I’m sure many more. It has a great benefit of reinforcing branding. Slack, for example, uses variations of their logo. Looking at a design in which no-one has uploaded a display photo, instead of looking like homogeneous and confusing like in Facebook’s solution, it now looks finished, inviting, and on-brand. 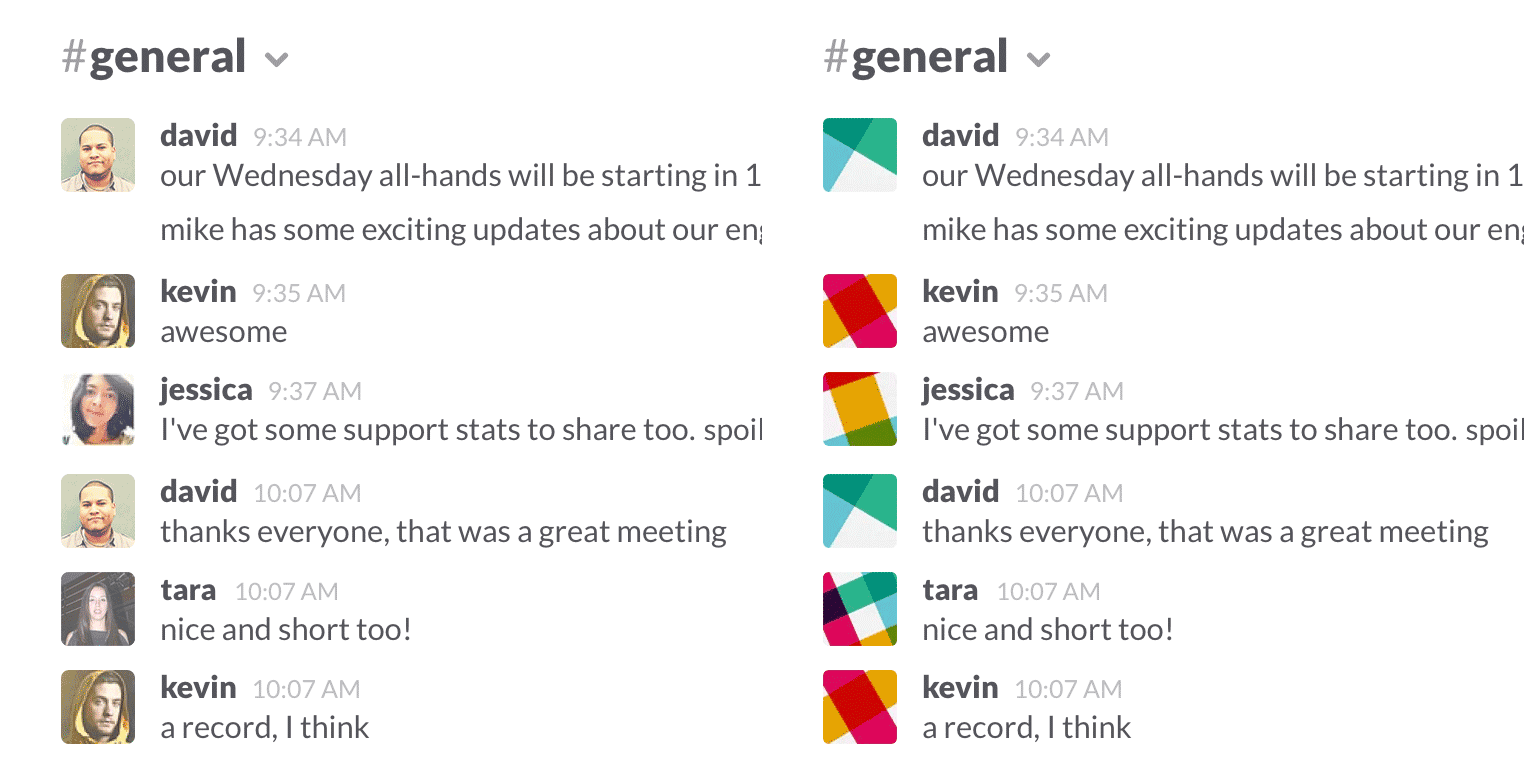 This approach can be great if each placeholder were unique. However, in Slack’s approach, each placeholder avatar looks like a subtle variation of the last. It’s difficult to recognise someone by their placeholder, although it does provide some recognition when placed alongside a few user-uploaded display photos.

Gmail, Dropbox and Apple take a third (and my personal favourite) approach - using the user’s initials for the avatar. Some use both first and last name (Apple), others use just the first (Gmail).

Gmail and Dropbox go further, adding a unique colour to each user. Jerry Primrose is a red JP, and Jeremiah Philip is a green JP. This provides a recognisable avatar in isolation, as well as in context. Note that this solution may present problems in non-English countries where people don’t always have exactly 2 initials.

So how do we do it? You don’t want to pick any random colour out of the 16,777,216 possible variations because they’ll probably look terrible. So we just pick a few that fit the design, no more than 10.

Next, we need to assign each user a colour. This can’t be randomly done upon render, because Jerry Primrose must always be a red JP. The solution is no good if you refresh the page and he’s turned green.

We can solve this problem using hash codes. This lets us avoid creating another database entry for each user, by calculating it on render, but having the same colour each time. Simply hash the full name, do a modulus by x (where x is the number of colours you picked), and then assign that person the colour at the resulting index.

Try playing around with the example below, then check out the code to see how it’s done.

Next, learn how to encourage users to upload an avatar.